The Chinese appreciation of foreign products has grown fast in the past years and beer is not an exception. With a population that becomes wealthier and younger, we see an increased interest in imported beer brands.

With that said, entering the Chinese market requires patience as it’s highly competitive and not the easiest to navigate.

Therefore, I’ve written this guide that covers the following topics:

The same as it goes to the wine market in China, the beer market is growing fast.

I’ve experienced the transition myself, when I lived in Shanghai in 2009, craft beer and foreign beer brands were rarely seen. People mixing 18-year-old Chivas with cheap green tea in bars were pretty common though.

Previously, lighter beers (like Qingdao, 3.6% alcohol) was something that people normally enjoyed with a glass of Baijiu (rice wine) on the side. This was the typical way of eating and socializing.

Sure, I can down one or two glasses of traditional Swedish liquors at Christmas (yes, it tastes like medicine), or Chinese rice wine once in a while.

But I understand why the Chinese have started to appreciate foreign wine and beer instead. We’ve seen the same trend in Europe and the US.

Nowadays, you’ll see German, Belgium, and British beer brands lined up, not only in supermarkets like Olé (that specializes in imports of foreign food), but also at 7-eleven and sometimes even at Alldays.

I won’t go into numbers but can assure that the Chinese will appreciate foreign beer even more over the years, especially the younger generation. 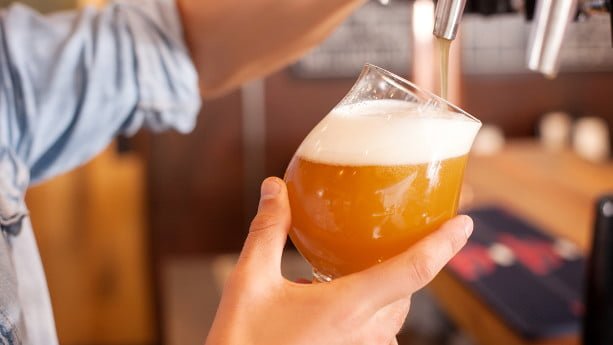 Drinking foreign beer is an exotic thing for many Chinese

Worth mentioning is that drinking imported beer, for example, stronger beers made by monks in Belgium, or American craft beer, is exotic and a status thing nowadays.

A Chinese friend of mine even said that when he’s inviting friends for dinner at home, he only buys foreign beer brands as this will assure that the quality is good (many Chinese don’t even trust their local beer brands), showing appreciation to his friends.

Keep in mind that many decide to purchase online, as different brands are easily accessible, the cost is equal, and can be transported all the way to your door. 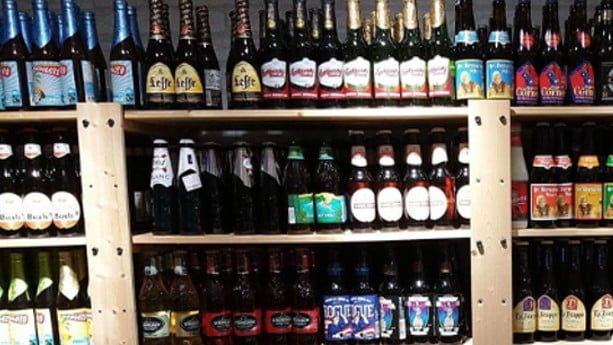 Numbers of ‘bottle shops’ have popped up in places like Shanghai. One of the most famous is Beer Lady, where you simply pick your bottle and pay at the cashier. The Chinese often drink more “exotic” and expensive beer here, like Delirium, Chimay but also smaller brands.

Where in China should I sell beer?

The biggest demand for foreign (craft) beer is undoubtedly in the bigger cities on the east coast, like Shanghai. But people in smaller cities have also started to show appreciation.

If you’re a smaller brand, exporting craft beer, for example, I’d recommend that you still aim for the bigger cities as people are generally wealthier and still more open to foreign products.

It’s usually easier to work with the customs in these areas too, as many shipments are made every day. Second-tier cities (and even smaller cities) should, whatsoever, not be neglected as these are on the rise.

Getting help from a local distributor or agent

You can also try to find a Chinese distributor or agent who can teach you more about where you can expand more freely, with less competition.

When you sell beer in China, you need to know that the larger beer brands are spending much money on marketing, trying to grab as much market shares as possible.

This doesn’t mean you’re cut out of the market because you’re working in a completely different segment as an exporter of craft beer and a smaller exporter.

It’s not unusual that beers for USD 5-10 a can or bottle can bring in decent amounts in sales.

Keep in mind that many other smaller craft beer breweries are targeting the Chinese market, hence you can face competition from these.

The following countries were the biggest exporters of beers to China in 2017: 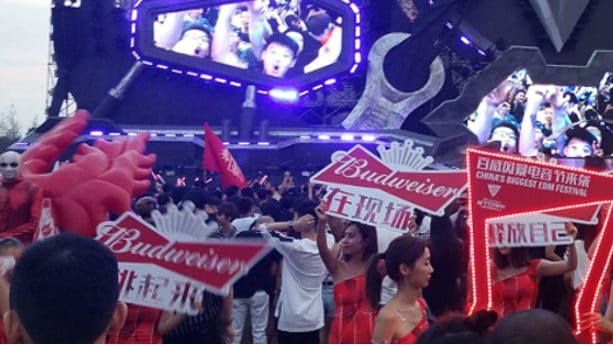 The biggest beer brands in China

Except for the local Qingdao and Snow beer, which have by far the largest market shares, the most common foreign brands in Shanghai are, from my experience: Tiger, Budweiser, Heineken, and Carlsberg.

But don’t be surprised if you go to smaller cities, like second-tier cities, and see that ‘medium’ sized beer brands (such as Tuborg from Denmark) have taken many market shares, avoiding competition in the bigger cities. 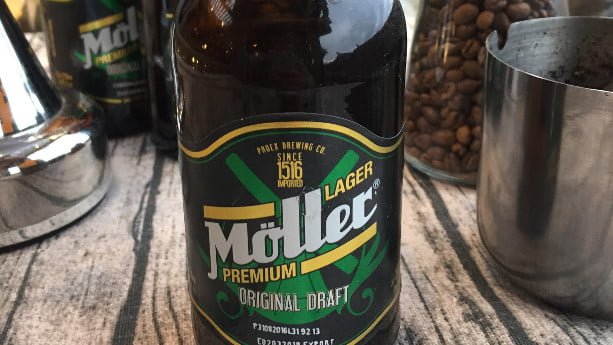 A bar serving Möller beer in the Old Town of Lijiang, Yunnan province. It was the first time I ever saw this beer. How it ended up in this local bar? I have no clue.

What types of beer are in demand in China?

While the Chinese drank mostly Pilsner previously, the demand for stouts increases a lot, Weissbier is also getting highly appreciated.

The national beer brand Qingdao has even started to sell their own versions of Weissbier and stouts in local shops.

The same goes with ales, as the Chinese tend to like lighter pale ales, sometimes with a fruity touch and less bitterness.

Just making a comparison with coffee, in many Asian countries, including China, it’s a common thing to drink less strong coffee, like cappuccino, or regular coffee with milk.

Espresso is not their thing (yet). Regular coffee is simply too bitter.

Maybe it will change over time when people get more used to the bitterness. Some of my Chinese friends have actually stopped using milk in their coffee, which might show small signs of a trend shift…

Import Regulations for Beer in China

The system for regulating alcohol products imported into China is similar.

First of all, you need to know that China has different standards, similar to ISO-standards in the West, called GB (Guobiao standards).

Prior to exportation, you need to confirm that your products comply with the standards required for your specific product and also provide test reports that prove so.

For beer and wine, the GB standards might differ mainly due to the following reasons:

GB standards for beer include:

HS codes (Harmonized System codes) are used internationally to classify products traded in different countries, these are applied in China as well.

The codes are needed to classify the exact product you intend to sell and to determine tariffs and taxes.

Process when exporting beer to China

I won’t go into details, as I’ve already covered the process when exporting wine to China in a separate article.

To summarize, you need to manage the following steps:

a. Find a Chinese importer and sign an agreement

b. Register your company on AQSIQ’s website (this requires that you know the HS codes for your products)

Keep in mind that your importer and agent have obligations at their side:

a. Business registration at SAIC (State administration for industry & commerce)

b. Get an import and export license from MOFCOM (Ministry of Commerce)

d. Getting an Automatic Import License from MOFCOM

What do I need to include on the beer label?

The GB standards related to labeling will determine what you need to include on the label. See the following GB standards (included above):

b. GB 7718-2011 General Standard for The Labeling of Prepackaged foods

Information that needs to be included is:

Do I need to get my products tested before I export to China?

The same as it goes with labeling, you need to test and prove that your products comply with the national GB standards.

Keep in mind that CIQ personnel will do an inspection of your goods and to make sure that your products meet local regulations and labeled correctly.

There are standardized tests that can be managed by professional firms. Some of the parameters the tests can analyze are:

Can I sell beer online in China?

Yes, foreign exporters can sell beer online in China. Common options where beer can be sold are:

What are the import tariffs and taxes for beer imports?

You need to pay the following taxes exporting beer:

Taking the opportunity to visit a couple of trade fairs can be a great opportunity to learn more about the Chinese beer market, equipment, packaging and marketing, just to mention a few.

It’s also a great chance for you to network with people who have on the ground experience, you can even find your future distributor at a trade fair.

Below I’ve listed some of the biggest fairs for beer products in China.

In 2017, almost 150 different national and international breweries visited CBCE, making it one of the most popular beer fairs.

The fair is held in Shanghai in May each year.

Another big beer fair is CBB, held in Beijing or Shanghai on an annual basis.

The fair has attracted more than 50,000 visitors a year and several hundreds of exhibitors decide to put their product on display.

The fair has been held for more than 20 years and shouldn’t be ignored if you plan to visit different fairs in China.

The craft beer industry has grown massively globally and China is a promising market for foreign craft beer brands.

The market grows exponentially in China and the beers are sold at comparatively high prices, averaging at around 13.8 euros per liter, according to the EU SME center.

They are also sold in larger volumes per glass and the typical customers are young and high-income customers living in urban areas.

Looking at market entries, companies typically start in Tier 1 cities and then continue expanding towards Tier 2 cities, and so on.

Ales are predominant in China and the beers are typically consumed when eating Western food or stand-alone.

Imported beer gets increasingly popular in China as the Chinese have started to appreciate foreign products. With a population that gets wealthier, travels more, and get more exposure, we see a trend shift.

The rapid increase in stout is frequently talked about in media and sales of imported stouts have increased much. Other beer types, like Pilsner, Weissbier, and light pale ales are also sold in vast amounts.

Before you export your products, it’s important that you decide whether you want to go for an online-focused approach, or by simply selling in local stores and bars. Both options are also available of course and can bring you great sales.

Keep in mind that you need to comply with local GB standards (presented in this article), as these are used for verification at product testing and labeling.

If you want to know more about selling beer in China, I recommend you to read the complete article.

How can you help me take the next step?

Do you need help with CIQ, CCC or setting up your first Tmall store? We work with leading consultants and service providers – that can help you through every part of the process:

b. Shipping and customs

d. Finding retailers and distributors for your products

What are you waiting for? Click here to request a free quotation.

8 Responses to “How to Export Beer to China: The Ultimate Guide”